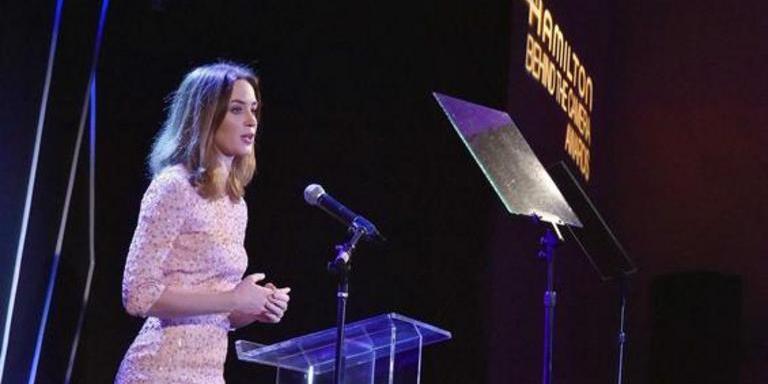 At ELLE's Women in Hollywood event last night, honoree Elizabeth Alton made a powerful speech denouncing expectations women put on one another and to make a call for not just protecting women but fighting to protect and elevate people of all identities without judgment.

Below, her full speech:

"It is a truth universally acknowledged, that a single man in possession of a good fortune, must be in want of a wife." It is also a truth, universally known but too-rarely acknowledged, that an individual in possession of great power, may sometimes use it for cruelty rather than good. And it is a truth universally known by women everywhere, that a woman regardless of her fortune is by nature a strong, powerful, magnificent thing.

We know this. Everybody in this room, and many outside of it, know this. My parents know this. They raised me to be a hard worker, to value the time and contributions of others, to pursue with my whole heart whatever I wanted, and to respond to my great blessings with acts of service. I wasn't told to be a "strong woman" in my house – because being a woman and being strong are innately entwined, and the former does not preclude nor in any way make harder being the latter. Women are strong. And women who have bravely come forward in the face of great power being abused are even stronger.

Of the immense privileges in my life, and there are many – whiteness, material wealth, a roof over my head, two living and married parents, an education without financial debt, the freedom to pursue my dreams without limit – the one with which I was least prepared to reckon was the happenstance of whatever confluence of fate meant I was not physically abused by figures of power in my industry. And what I have come to is that I need to do better. We all do. Because as I evaluated my career, looked back, tried to understand how I had the courage or werewithal to deny and avoid a private meeting with an extremely powerful producer whose name is now everywhere, I realized – I've been silent, too. I stand in awe of the courage of the survivors who have come forward, and in humiliation at our complicity.

I used to think I was just more confident than the rest, less fallible, to not put stock in a producer spanking me when we passed in a hallway. I would shout from the rooftops that it didn't bother me, that I knew that poor behavior reflected on him and not at all on me. But isn't that a problem? I am sick to think that I just took it, and thought that being above it was the same as fighting it, that knowing it was wrong was as good as calling it out, or that calling it out was tantamount to changing it. Of everything I am about to say, I was once or still am guilty.

It is increasingly clear to me that our industry at large has a disconnect between what we preach, how we speak through our art, and how we act. We champion LGBTQ rights, and yet there is a disturbing frequency with which we fetishize and otherize gay characters in our films and on television, and there are generations of actors and actresses have been advised – are still being advised – to remain in the closet for the sake of their careers. We all stood up for the Women's March and decry sexual misconduct by the President of the United States, but we give lip service about "strong female characters" as if that is both unique and all that matters in being a less caricatured woman on screen, and remain silent about the known abuses of women behind closed doors. We proclaim our diversity while not truly being inclusive, not in meaningful, long-term ways. We're not listening either to ourselves or to the world around us, and we must start.

Through work I have done with the Invictus Games, with men and women who have served their countries, served all of us, I have come to learn that the most powerful tool you can give somebody is an open door. Don't push them through it, don't tell them when they must walk through or warn them that if they don't go right now or with perfect posture that the door will close and be harder to reopen. Open it, and then be quiet. Listen. Be right there if they ask for a hand, ready and willing to reach out. And then let people go through on their own, and tell their stories and be masters of their fates on the other side. It is vitally important that we with power offer opportunities without conditions, and without our own filters. We as women know better than most what happens when we disrespect each other, when we cut one another off at the knees with gossip or judgment. Open the door, and save the anger for whosoever would dare put a doorstop in its way or prey on those going through, not for people who walk through it differently than you might.

Women are strong. We endure. We are all many-splendored things. We are mothers and daughters, sisters and nieces and aunts, friends and colleagues, business partners and mentors. We are a patchwork of colors and languages, we come from different places. We love differently and suffer differently, but all know we must use the former to stem the latter. And we must not only open doors, but give ourselves the tools to build more.

It is a truth universally acknowledged that women are the givers of life – let us be givers of new life to the work we love, too.